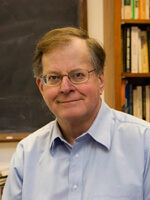 James Moor is the Daniel P. Stone Professor of Intellectual and Moral Philosophy, Department of Philosophy, Dartmouth College. His professional interests are in philosophy of artificial intelligence, philosophy of mind, logic, and computer ethics. He has been the President of Northern New England Philosophical Association – 2013, a Member of National Academies Committee sponsored by DARPA: Ethical and Societal Implications of Advances in Militarily Significant Technologies that are Rapidly Changing and Increasingly Globally Accessible – 2010-2013, he has been Honored as a Founding Member of Computers and Philosophy Association – 2010, he has served as Chair of Philosophy Department for many years. He has served as the President of the International Society for Ethics and Information Technology (INSEIT) (2004-2008).